The House Of Djinn by Suzanne Fisher Staples 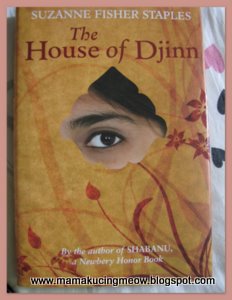 This book is the sequel to "Shabanu : Daughter of the Wind" and "Haveli".

Initially I was kinda lost because I didn't read the other two books.

In this book, is set in Afghanistan. Story begins with Shabanu who have been in hiding for 10 years since the day she staged her own death to escape the evil crunches of her brother-in-law and for the safety of her daughter.

Her daughter, Mumtaz, have been raised by her husband's family and have been given the education and security which Shabanu demanded for her daughter.

Mumtaz's closest friend was her cousin Jameel.Her protector was her Baba the leader of the Clan. Only Baba can understand her loneliness without a father and a mother. Being constantly bullied by the women in the family.

One day, Baba suddenly died. And it was revealed that Jameel is to take over as the leader of the tribe. His uncles were "overlooked" in this matter. One bear grudges while the other was happy to step aside for Jameel.

It was also revealed that Jameel is to wed Mumtaz. This cause both of them to questions their feelings and whether they are willing to give up their future in order to fulfill their obligation to their family.

For me this book is an average read mainly because I did not have the pleasure of reading the previous two books.

However, the emotional turmoil of the main characters were well reflected in this book. The flow of the story was well done and smooth.
at 3:39 PM

Not depressing la. Saja the two of them exploring what they want in life. Whether they should go find their own love or to follow tradision

Hi SK, I really admire you with your voracious appetite for books.
Makes me wonder when dating days you had a book in your handbag? Ha ha ha.
I only know two other persons with hobby like yours.

I am more into bios....non-fiction stuff....more on science or mysteries or medical, investigative kinds.
But hardly read today.....
Have fun.
Lee.