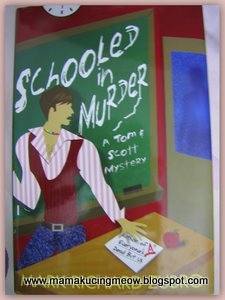 Tom Mason is a teacher in Cleveland High School. He is also the Union Representative.

He hates faculty meeting. It's endless and boring. Nothing much get done there. Two groups the old school and the suck up kept at each other throat.

It was one such meeting..Tom got bored and sneak out to take a break. When he came back, the meeting room was empty. Meeting was adjourned.

He heads toward the stockroom and unwittingly bump into two teacher having their tryst there. Both are male teachers and one of them are married. Tom saw a leg sticking out from behind some boxes. When they look further, they found that Gracie(the teacher who storm out of the meeting) was dead with the black board eraser stuffed inside of her mouth.

The Police was called in. The school administrators were unhappy as it gives bad impression of the school. They come to Tom as he is the Union Representative there.

Everyone were interviewed by the Police. End of day, Tom was exhausted. But when he went into the car, he found a second corpse laying behind his car.

This plus the fact that he discovered the first body and that he had sneak out from the meeting earlier made him seems suspicious. He is one of the prime suspect. What worst is that he soon discovered that there are people who is trying to pin the murders onto him.

He had to discover who is the real murderer fast before the Police pin it on him. Together with his lover, Scott Carpenter, a former professional baseball player they tried to investigate.

I find that I don't like this book. Everything seems to be jumble up. Most of the male teachers seems to be homosexual while the female teachers are lesbian. Both groups also tend to be bi-sexual. There are no fidelity in marriage nor in couple/partners.

I am not anti homosexual or lesbian but there are just too much reference on this. Kinda hard for me to keep track of who is doing it with who and who is the partner of who.

The plot is simple. The reason for the murder seems to absurd especially since so many people are involved. The reason would be more logical if the murders were done on an impulse.

As usual, I might not like this book but other might find it interesting for each person passion for reading is not the same.
at 8:27 PM

Hi SK, most of the books you reading I've never heard before.
Gosh! You are a voracious reader! And will read most books.
Me, I prefer bios mostly.
Have fun.
Lee.


LOL..I read bio too but not that often.