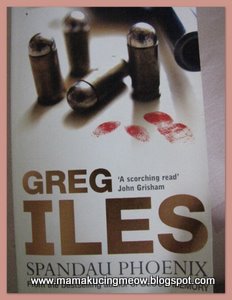 It was an unexpected assignment. Berlin police sergeant Hans Apfe was pulled into duty as he was getting home to his lovely wife Ilse.

His duty is to guard the rumbles Berlin's Spandau prison. The Berlin Spandau Prison was recently demolished after the death of its last prisoner..Prisoner #7.

Why is the demolished prison so important that it needs guards from 4 countries- Germany, Russian, America and British? It seems to be an international concern.

It's all because of the notorious Prisoner #7. He is known to be Rudolf Hess, Hitler's fanatical Deputy Fuhrer. He was captured in his crazy mission of flying all the way to Britain for a peace mission for Hitler. Since his capture in 1941, he had been locked up in that prison. Some had speculated that Prisoner #7 is not Rudolf Hess.

That night, Hans, stumbled into 6 pieces of paper hidden in a brick under the rumbles. It seems to be the diary of Prisoner #7.

The diary holds the answer to all the question. And all nations which would be affected if the contents of the diary is made known are anxious to get their hands on the diary.

Hans discovered how deathly the diary can be when he was "detained" in his own Police station and one of his colleague murdered in front of him. He was rescued by his estranged father. Together they went to rescue his wife Ilse with men from several agencies after them.

This is a very fast paced book. Something like Tom Clancy's Power Play Series. Innocent bystander turns into desperate combatants at the brutal violence, global intrigue, treason, and terror. Every nations are in a battle for supremacy. There is nobody you can trust.

It was so fast paced that I felt lost at certain parts. One part of me wants to know the outcome as soon as possible and another part of me was frustrated by the twist in the plot.

The down side of this book is that I read this at a wrong time. One part of this involves nuclear reactor exploding. This reminds me of the situation in Japan now. Made me real nervous.


Overall an exciting read. I like Greg Iles book very much. The one I like most is "24 Hours". Story about a kidnapping.
at 5:00 PM

Hi SK, I read about this fellow! How they tracked him down. Took years.
And yes, about that prison too.
Very interesting.

You should read that book, Nuremburg trials. Very interesting.
Lee.