The Choice By Nicholas Sparks 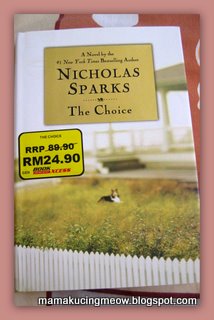 After a few hours of non-stop reading, I have finished this book. Started reading around 4p.m. this afternoon.

Once started, I can't put down this book. It was THAT good for me though others might disagree

This is a simple love story. Travis, the hero in this story is the only unmarried male in his group. He changed girlfriends as fast as he change clothes. Nope, he is not a playboy. It just seems that he haven't found THE ONE yet.

Gabby just moved next door to Travis. Gabby moved here so that she can be nearer to her long term boyfriend. They have been together for four years and yet he have not pop the question. She thought she was happy but deep down inside she feels something is missing

Soon she discovered her prized dog, Molly, was pregnant and she suspected that Travis dog have something to do with it. She have been hiding her dissatisfaction  against Travis for quite some time. From the loud music that he play at night to his roaming dog.

Finally she went over and "exploded". Accused Travis' dog impregnating her dog. Though Travis tried to explain but she refused to listen

Then she brought her dog to the vet and discovered the vet is Travis. Travis explained to her that her dog is indeed pregnant but not from his dog coz his dag have been neutered. Gabby was very embarrassed and apologise profusely. Travis was very forgiving.

Since then Gabby tried to avoid Travis due to her embarrassment but Travis kept seeking her out. He was attracted to her. He was a bit disappointed that she have a boyfriend but yet he did not give up.

They found that they were attracted to each other and soon fell in love.

This is not the simple ending. In the second part of the story, Travis was faced with a tough choice whether to let Gabby go as Gabby willed or to define her will.

The first part of the story was light hearted. The joy of courtship. Ahhh...the wonderful experiences. Reminds me of my dating times. Such great memories. The part where Gabby was faced with a choice whether to stay with her boyfriend or to go with Travis was very touching.

The second part have a bit more suspense. I can't help cheating by flipping to the last page to know the result. Yes, it's very bad of me.

Damn u kat... now u got me wanting to read this one... i go find, can download anot, if not, hijack urs.

"I can't help cheating by flipping to the last page to know the result."

Hahahaha! What if the ending not something that you like, then how? Continue reading or not? :P

I love this book but maybe opposite for you. In reading we seems to have different taste kakakaka

@Kat Entahla... so far... the only buku by thif feller that doesn't receive my criticism is The Notebook, and A Walk to Remember. the rest... I konk... unbelievable. Neway, gonna give this one a try. got ebook!

@Cheeyee... i always cheat... especially if it's a mystery book... usually if mystery book, I will cont to read and try to 'solve' and understand the mystery, but if it's not... like romance or wud, sorry, bye bye! LOL!