The Murder Of Roger Ackroyd by Agatha Christie 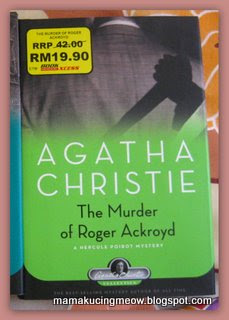 I have been a fan of Agatha Christie book since I was young. She is a real amazing lady. Just too bad my school library did not stock up more Agatha Christie books back then.
Hence now whenever I saw Agatha Christie book I would grab. Found this lovely hardcover Agatha Christie book at my friendly neighbourhood bookstore, BookXcess, at an affordable price.
It was set in a fictional small village known as  King's Abbott in England where everybody know each other's dirty laundry. Hercule Poirot and live in this village after his retirement. Story is told from the voice of Dr Sheppard, the village doctor who also acts as Poirot's side kick.
The story begins with the suicide of a wealthy widow, Mrs Ferrars, who was rumoured to have killed her husband. She was romantically link to Roger Ackroyd, a widower. Roger wanted to marry her but then he was horrified when she admitted to him about killing her husband. She also told Roger that she was being blackmailed by somebody. Soon after receiving this letter, Roger was murdered. Stabbed with a silver knife from the back.
Poirot was asked by Flora (Roger's niece) to investigate.
As usual there are many suspects which seems to have motive and opportunity to commit the crime. One by one Poirot managed to rule out all of them.
This story have an amazing plot twist. Frankly, I was shocked and amazed on discovering the identity of the murderer.
I give this book 4 star out of 5.
at 8:30 AM

The other day i was reading one of your agatha u lent me.. but i dint know what the story was about.. a quarter way, i changed to another book.. John Grisham.. :)

this is one of my favourite agatha christie mysteries... you must try 'and then there were none'... mind-blowing ending!

Hahaha...that one is in old english. Naybe that's why rather confusing

I think I have that book.It's a 5 or 4 books in 1. One of the story was And Then There Were None.

A friend got really lucky. He found the "Curtain: Poirot's Last Case" in PLB sale

oh i bought 'curtain' recently too... hmm okay lah, typical christie ending. which is to say, the whodunit is very unexpected! haha. sad ending though, since it's his last case.

where did you find the curtain? MPH? Borders?

sorry late reply, x nampak last time. :P i bought from popular cos i had some vouchers. kekeke

if i ever go there must try and find this. Collector item leh