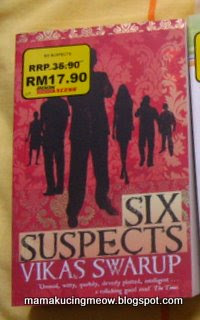 I bought this from BookXcess during their 3rd Anniversary Promotion. If not mistaken there was an additional 20% on top of the price state.

It was an impulse buy andI have no regret in getting this book.

What attracted me to this book was the author's name. Am nuts about Asian writers. Have you heard of "Slumdog Millionaire"?It's written by this author.

The story starts with the murder of the notorious, Vicky Rai, the son of a corrupted politician and gangster, Jagannath Rai.

Vicky Rai was shot at a party in his home. The party was to celebrate his acquittal of a murder case.

Six people were found with guns in their possession when the police seal-off the murder scene.

1)Mohan Kumar, the Bureaucrat. He is as corrupted as can be. One day he went for a seance and the spirit of Mahatma Gandhi seems to have possessed him. Since then he was like Dr Jekyll and Mr Hyde. Scaring the people around him with his multiple personality.

2)Shabnam Saxena, The Actress. She is very successful and is the subject of envy for many people. Despite the stardom, she hungers for her family love. She trusted people and was bitterly betrayed.

3) Eketi, the tribal who travel from his native Andaman Island to India to retrieve a sacred object that was stolen from his people. At first he thought India is a good place to stay on but later found out that it is a very harsh place. People were very cruel, unlike those in his Island. He dreamt of going back to his beloved Island once he retrieved the stolen object and also bring his new found love back with him.

4) Munna Mobile, the Thief. His speciality is to steal handphones. He met a rich girl. At first he was just fooling around looking for a quick lay but then he fell in love. It's a forbidden love as they are of different caste.

5) Jagannath Rai, the Politician. He is a very corrupted and an ambitious politician who happens to be the father of Vicky Rai. He is like a gangster. Did many crimes and yet he always got away with it because people are too scared to go against him. Those who are brave enough were "eliminated". He wanted to be the next Chief Minister and Vicky Rai stood in his way.

6) Larry Page, the American who works as a forklift operator and have the same name as the Google's founding CEO. He is like "Mr. Bean". Always get in to trouble but some how he is always lucky enough scrape thru it. He came to India to marry his "Mail Ordered Bride".

The above mentioned people have motive to murder Vicky Rai.

The characters in this book are well developed and very lively. I can't help laughing like a hyena at the things that Larry got himself into. Also can't help felling anxious about Shabnam's and Munna's predicament.

This book is a must read for all mystery fan and those who love a bit of spice in their live.
at 7:32 PM