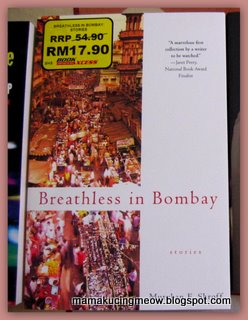 I bought this book from BookXcess last month. Am always fond of books from Asian authors.

Each story is special. Each story is written in the point of view of an individual and at the end of the story there would be a surprising insight about that person or that person discovered something that he/she have been blind about.

I especially love the story titled "A Different Bhel". Story told from the voice of a woman named Hilda about a local notorious thug who had terrorised the place when he was young. The thug was painted as dare devil and totally bad man. But the end of the story, it was revealed that another person crime is worse than his.

"Traffic" was another great story. A woman fell in love with the wrong man. She was alienated by her friends and relative and the man threw her out on the street.In a moment of despair, she contemplated the unthinkable. But she was saved by a coconut.

In the story of "Babu Barrah Takka", a straight forward and honest man was forced to accept bribe for his daughter's future.

This book really merged the old traditions and modern life in Bombay city.

Sounds like a good story. I wanna borrow, can?

hey..when can i come to your mini library??

OK. Earmark this book for you. Pass to you next round we meet