Slumdog Millionaire(Originally Published as Q & A) by Vikas Swarup 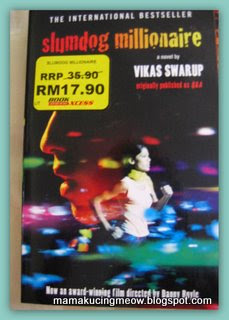 I have been hoping to read ths book since I finished reading "Six Suspects" which was also written by Vikas Swarup.

This book was originally published as "Q & A". It was made into a movie and have won awards. I managed to catch part of the movie only. The part where he was acting as a Tour Guide at Taj Mahal. The story in the book and the movie defer slightly.

This novel tells the story of Ram Mohammad Thomas (funny name ya? There is a story behind that) participated in a game show called "Who Will Win A Billionaire" and won. He was just an 18 years old poor Waiter from the slums.

Of course the Organiser did not believe that he could answer all the questions correctly without having outside help. How is it possible that a poor waiter from the slum have the knowledge required to answer the questions? Seems to be quite impossible.

The Organiser with the help of the Police got him arrested. The was questioned by the police and by hook and by crook they are determined  to have him "singing" out the truth. .

He was torture. There was a moment where he felt he can't take it anymore, a lady lawyer came and rescued him. She brought him to her place. He was asked how he knew all the correct answers to the questions.

He was aprehensive at first. Thought maybe it's a trap. But the thru a flip of his "lucky coin", he decided to trust her.

He begin to tell her how he knew the answer starting from the 1st question.

There is a story behind his answer to each question, right up to the 13th question.

I love this book. I gave it full marks.

To some it maybe confusing as the story tend to "jump" jump here and there as he narrated how he knew the answers. The ending was beautifully written.

My regret is that now that I have read these two books, I will be having a very high expectation for his next book. Hope the next book will be just as good if not better than these two.
It seems that he "know" the answers to the questions due to his life experience. For each question, a chapter of his life unfolds.
at 3:11 PM

i watched the dvd already.. not bad..

Some people said the movie is better than the book.