Odd and The Frost Giants by Neil Gaiman 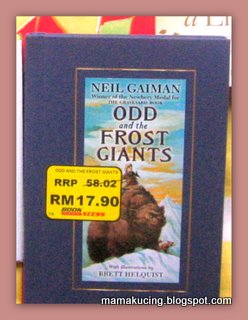 I have heard a lot anout Neil Gaiman but have yet to read any of his book. Saw this book at BookXcess during one of their sale.

It's suitable for young readers but I am always young at heart. Hence, I get to read this.

The story is a bout a little Viking boy whose name is Odd. But his name is not considered as odd during his time coz it meant "The Tip Of A Blade" which is considered as very lucky.

His mother was a Scoitish maiden kidnapped by his father the Viking in one of their raids. But she gradually grew to be accustomed to her husband.

Now, Odd's father was a good woodsman but he pass away during one of the raid.

He tried to take his father's place but his one of his legs was crushed when a tree fell on him. His mother re-married and the man already have sons. He was ignored.

One day he decided to runaway and  go back to his father's old house to stay.

There he run into the Gods themselves. The Gods were in trouble and he helped them to saved the City of God from the "Evil" Frost Giants

I love this simple but thought provoking book. Some of the things can really apply to our everyday life. Such as Odd's courage and determination. And then of the God's foolishness.

I think this book would very much be enjoyed by both boys and girls
at 12:16 PM

i bought this book, thought will be like his other children books 'coraline' and 'the graveyard book'. compared to those two, this is not so interesting. but it's like those myth & legend stories so not too bad.

I love those greek myth and legend. So this one kira suits me.