The Magpie Bridge by Liu Hong 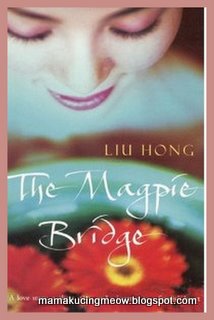 One night she was visited by her grandmother,Tie Mei, spirit. At first she thought it's just a dream. But later on the visit become more frequent.

At first it was unclear the purpose of the visit but later it was revealed that Tie Mei wanted Jiao Mei to find their ancestor's treasure, a piece of brass mirror which carries a terrible curse.

To me this book tried to imitate Amy Tan's Joy Luck Club but fail.

There are flash back between present and past for Tie Mei, Jiao Mei and Barbara. Also trying the merge the western influence and eastern influence together. Instead of making the story flow nicely together, this confused me. The constant flash back and changing view point makes me unable to enjoy the "mood" of the story.

This is my personal opinion only
at 7:02 PM

me? depending on what book. If Enid Blyton ones easy. Two or three a day also no problem. But If Shakespeare then 1 month also maybe wont be able to finish :p

The story sounds interesting but looks like the writing style made you confused?

Ya coz of all the flash back...not only from 1 person but from a few person. Very confusing