In 5 Easy Steps by Lum Kit-Wye 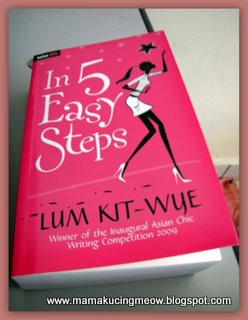 Elaine Chan was just spectacularly dumped by her jerk of a boyfriend, Patrick, at her class reunion in front of all her classmates who had laughed at her during her school days. To make the matter worse, she also lost her job when Patrick fired her. She was working for Patrick father.

Then she read in a magazine which teach her to re-invent herself in 5 easy steps. When her mom start match-making her with every Tom, Dick and Harry, she had to take a drastic step. She grab the chance to work in Singapore when the opportunity arise.

The first night she arrived Singapore, she was locked out of the apartment. Lucky there was a nice neighbour, Kai, a guy who is staying next door with his grandmother and his father. And soon, Kai, become his best friend and "partner in crime".


Her first day at work as a secretary in a law firm were nearly disastrous but she bump into a gorgeous hunk who looks like Aaron Kwok.

The gorgeous hunk name is Evan and he is a successful lawyer in the firm. Soon he became Elaine's boyfriend.

Throughout all this, her neighbor Kai was there to help her...including the time when she tried to play sleuth to find the missing maid of an abusive neighbor.

Kai's relax attitude about life makes Elaine questioned her own happiness and of Kai's happiness as he seems to be heading into a disastrous relationship again.

This is the first Asian Chic-lit which I have come across and I must say, Ms Lum Kit-Wye had out done herself in writing this book.

For me this book beats Sophie Kinsella's Shopaholic series hands down! She really deserve to win "The Inaugural Chic Writing Competition 2009"

Her writing style are easy to read and characters are well developed. There are many aspects in the story which is believable and not too outrageous. The heroin was perfect. Appear to be helpless without being brainless and too feather headed.

I laughed out at the part where she describe how Kai's grandmother's denture got glued together when eating "Nian Gao"and the part where Elaine put too much pepper into her cooking.

This is a very enjoyable novel. I hope that Lum Kit-Wye will come out with a second novel soon.


About The Author
Kit-Wye has written numerous best-selling novels and divides her time between her beach house in the Bahamas and her New York Penhouse where she lounges around on her designer furniture seeking inspiration for her next best selling book....JUST KIDDING! Actually, Kit=Wye spends all her time in Singapore where she works hard at her lecturing job and, together with her two equally hardworking husband, runs after their two young sons, trying to stop them from destroying the Ikea furniture. This is her first novel.
(Extracted from the back of the book)
at 5:27 PM

Chic lit kah? Not sure if I will konk anot after read. Hmmm!

Eh I bought this book during BBWS also. Hehehe.

This one i think you wont fall asleep one. Coz inside got scene from Msia and scene from Spore. And there some very hillarious part. Then got 1 character in there which you will sure hate. I bet you wont konk out

Fast fast start reading this. Very syok...but if u kena panda eyes dont blame me ah...this one la that i read till 1am plus last night

sound like a bery good read leh.... wan search got ebook or not. but ar... too many ebook not read yet too. *faint*

I think I will like this one!! Eh, let me finish my stash first then I rent from you can ar? Hehe..

can no problem. After Cleffairy read then lend u la

This is really a good book

K, you made this book sounded really interesting! I love this kind of stories too. Btw, thanks for everything. I received the package already. Have a great day!
Blessings, Kristy

For me it's a nice book la. Am still waiting for you to publish your book :p

Ya this is a very good book