China Ghosts: My Daughter's Journey to America, My Passage to Fatherhood by Jeff Gammage 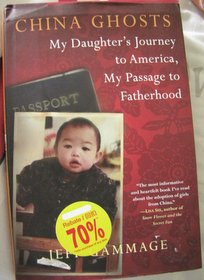 This is the story of journalist, Jeff Gammage and his wife Christine, journey across the world to adopt a child from China.

It line out how he felt about the adoption process in his country which leads to their decision to adopt a child from China. It tells how they fell in love with their daughter, Jin Yu and the worries that they had about her health.

later, it tells the story on how the challenges they faced with when they came back to their home country

Picked up this book from Popular Bookstore Sale last year.

The thing that I liked about this book that the language is easy to understand and the author had describe some things that readers might not know. For example the plague that happen in one orphanage which lead to change of policy in China.

Love the photos accompany with the story.

However, I felt that the title of the book does not really match with the story as it highlighted. It's more on what the author went through instead of the daughter, Jia Yu.

Some parts makes me felt that the author had gone poetic.

For example in page 114 where the author wrote that "I wonder, who took the time to find the likeness in our faces and in our hearts?How did this person know that Jin Yu was a good fit for us, and us for her? How did he or she create a family as similar as a family could be, consistent  and alike but for DNA?"

When I read this paragraph, I was thinking, "Gosh! I don't think the officials in China have the time to do this although there were a lot of stories floating in the printed and non-printed media about China's thoroughness and the red tapes there."

In page 165, the author was talking about how guilty he felt when he was wasting time in going to doctor's office and fertility clinic while Jia Yu was in China all alone, waiting.hurting, wanting and wasting her life. Where he wrote "she needed warmth and food and medicine. She needed laughter and love. She just needed just a little of what I had in abundance, and I did not offer. More appalling, it never occurred to me to do so. Not until I needed something from her, not until I wanted something from China, did I even think to ask."

I my opinion, the author was laying too much guilt trip on himself. How could he had known that Jin Yu was there waiting to be adopted when he and his wife were going through the process of trying to have a baby of their own? They had enough to think about at that time without thinking about the poor children in China, famine in other parts of the world, or child labour or green movement and other stuffs alike.

All these section, makes me feel that this book is more about what the author had gone through and felt rather than about his daughter's journey. This must have been a hard book for him to write.
at 11:27 AM

It must have been such an emotional experience for him, so much so that he felt the need to put pen to paper (or turned on Microsoft word hehe).