The Nanny Diaries by Emma McLaughin and Nicola Kraus 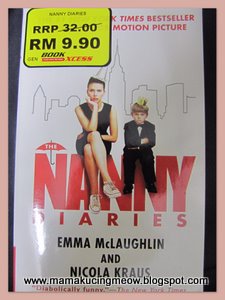 I was hoping for a bit of light reading when I pick up this book. Unfortunately it's not.It's a rather thought provoking sort of book.

"Nanny" is a student struggling to graduate from NYU. She advertised her service as a nanny in order to support herself and to afford the tiny studio apartment which she shares with another.

As the story goes, Nanny and the oby grew fond of each other. However, the longer Nanny was with the Xes, the more she was drawn into their webs of lies and deceits.


It was a tense 9 months where Nanny tried to help the boy, to maintain her own integrity and also avoid to be drawn into the domestic squabbles of the Xes.

Sometimes it's really scary on how a book can mirror life so vividly. Time and time again, Nanny was used mercilessly by Mrs X. At first,  Nanny would just tried to accommodate her ridiculous requests and made sacrifices. However, Mrs X seems to have taken Nanny for granted.

The despicable Mrs X also likes to dangle a carrot in front of the horses nose.

I love the part near the ending where Nanny realised what a conniving lying ahem ahem Mrs X was. All the frustration and anger described in that part was what I felt after the evil scheme was revealed.

I guess all these things made this novel such a great success. It got innocence, greed, envy and totally wicked.


I like this book. Reading this makes me want to watch the movie.
at 8:02 PM

Hi SK, I really admire you read all kinds of book.
Lee.

Lee
You are right. I wallop all sorts of books except text books :p

we share the same walloping style haha.. I also bought this book last saturday .. I think I've seen the movie but just wanted to see if the book was better :)

LOL....i havent wtched the show yet.